The “lightbulb moment” came to Andy Sales when he was studying a Master of Science in Welding Engineering at the UK’s Cranfield University, an institution that specialises in technology and research. The founder and managing director of innovative Australian start-up, AML3D, was adding to his apprenticeship qualification as a fitter and welder and a Master of Engineering at Deakin University.

“My interest was always in welding and joining,” says Sales who is also degree-qualified as a mechanical engineer and a chartered welding engineer. “I love the topic and I’ve got 30 years of experience.” His expertise has taken him to South America, Africa, Europe and Asia, working in oil and gas, resources, mining, manufacturing and fabrication. The inspiration for what is today AML3D was a subject at Cranfield on 3D metal printing using arc welding technologies – a bead-on-bead approach rather than the metal powder layering used in conventional 3D metal printing.

“I immediately thought, ‘This is very obvious, why aren’t we using this technology now?’” he recalls. “Welding has been around since the late 19th century and one of the early industrial companies was Lincoln Electric – they invented the arc welding technology and they’re a $US6.9 billion company now.”

While arc welding – melting a wire with an electric circuit to form molten beads – has traditionally been a joining process, Sales learned that in the mid-1990s, Rolls-Royce had approached Cranfield to look at alternative ways of manufacturing complex and high-value parts. “If you are working with high nickel or titanium alloys, they’re very expensive and you’re taking a block, machining it all down and throwing away a lot of material,” he explains. “So, they came up with bead-on-bead layering using welding technologies, and that’s where it started for me.”

AML3D was born at the end of 2014 and, after two years of materials testing and trials, the company won a $495,000 Commonwealth Government Accelerating Commercialisation Grant and today has commercial partnerships with leading companies across the aviation, mining, marine and defence sectors. 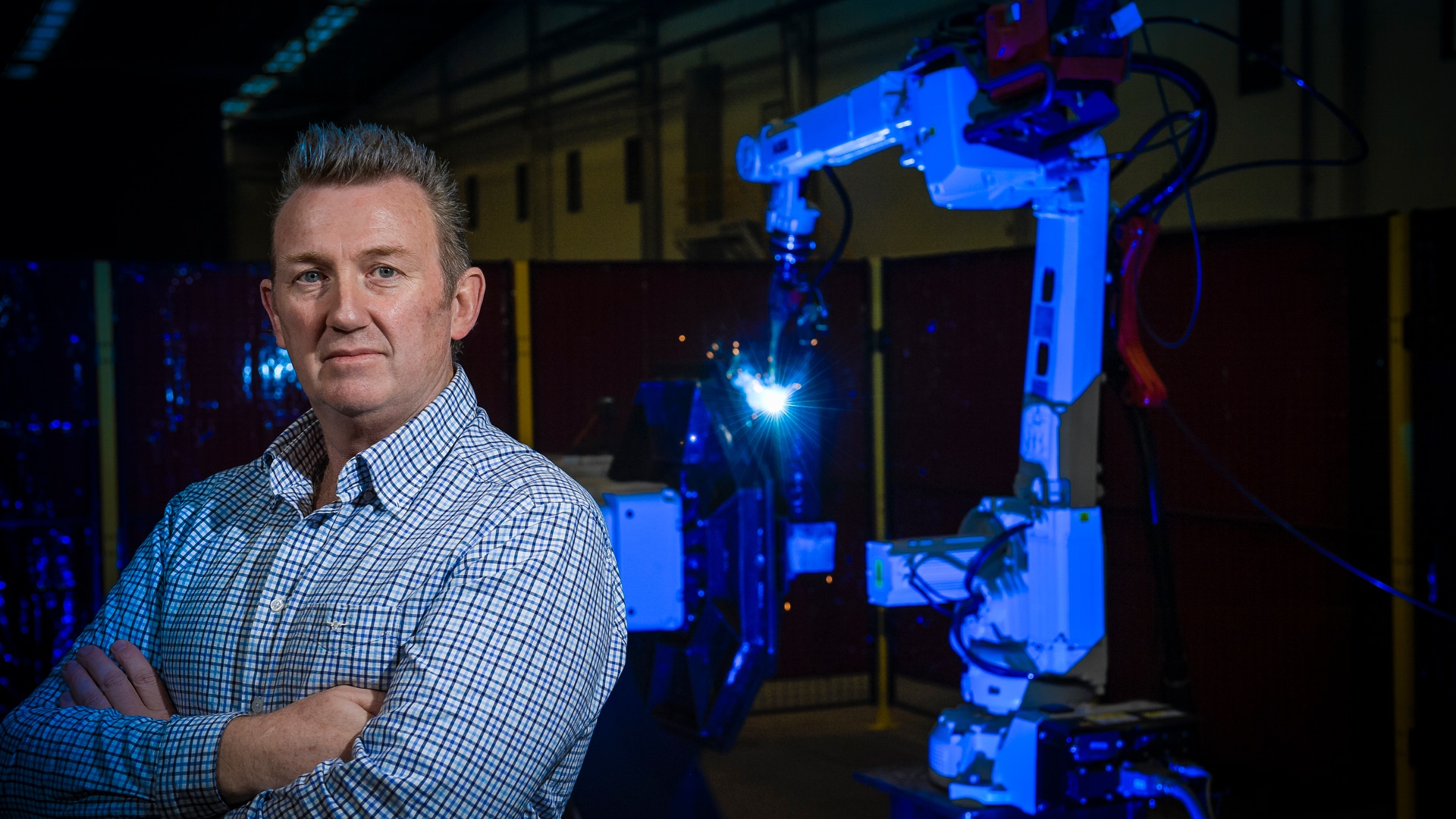 Sales’ obsession has been ensuring the process, materials and resulting parts are certified to global standards. “It’s a standard welding process to which we apply our own techniques with bespoke equipment to enhance the process, but because it’s such a proven science being used in a different manner to create 3D printed metal products, it makes it a known pathway to get accreditation and certification, which is what customers demand.”

What Sales and his team have created with AML3D combines that welding science with robotics, metallurgy and proprietary software to produce automated wire-fed 3D printing in a freeform environment. This means it can be set up anywhere and to manufacture parts of any size.

“You can put our system in a workshop, on a wharf or a remote mining site – you can put it anywhere,” says Sales. “If a customer wanted to do similar with a standard manufacturing process, they’d have to build a casting shop, which you’re never going to do at the point of need for the component, so our system is very flexible because the footprint is so small.”

It also improves the sustainability of operations. As well as saving the metal waste of the traditional methods of casting, forging and machining metals – an AML3D part emerges as close to its final ‘net’ shape – because the process melts metal wire rather than smelting large blocks of metals, it consumes “less energy by order of magnitudes,” says Sales.

The system’s ABB robots “only draw about 4 amps,” says Sales. “And the arc welding units mounted on the robots use about 2-3 times more energy than the robots, but even though you’re running on a three-phase electrical system, the amperage they draw through 24-hour use hardly gets the needle on the meter flickering.”

Sales first encountered ABB industrial robots during that a-ha period at Cranfield University, when the class studying additive manufacturing visited the UK ABB Robotics centre in Milton Keynes. “When I started to look for robotics for our system, I looked at others, too, but ABB was the obvious choice because of their level of support, their sophistication and also the ease of use,” says Sales. AML3D’s first ABB robot system was commissioned in January 2018 and since then, they’ve ordered several more units, some going to Singapore as part of AML3D’s global expansion.

The ABB industrial robots – namely the ABB 2600 and the ABB 1520 working in coordination with ABB A-750 positioners – are essentially working as welders in the AML3D system. “The welding head and torch are mounted on the robot, and the robot points and moves the welder, and so the robot is making the shape,” explains Sales. “We mount other things such as laser sensors on the robot too.”

AML3D only uses wire from suppliers with certification to global standards, and they offer a huge range of metals from ferrous to non-ferrous materials. “Basically, anything that can be welded via traditional methods, we can turn that into a 3D printing process,” he says.

AML3D listed on the ASX last year and Sales is confident of his company’s place in the future of Australian advanced manufacturing. “There’s an insatiable appetite globally for additive manufacturing,” he says. “Tier one companies all the way down to tier threes are looking for ways to improve the bottom line and a lot of them have got additive departments,” he says. “There are huge opportunities out there and it’s only going to keep growing.”