AU manufacturing was in decline but covid might revive it

The widespread shutdown of global supply chains caused by COVID-19 has been good news for Adelaide metal printing company AML3D.

His company makes metal parts, such as propellers and compressors for ships and the automotive industry, at its factory in Adelaide and exports them around the world.

The parts are created using a new layering technology, developed by Mr Sales, that combines traditional welding techniques with digital drawing, a robot and 3D printing to create metal objects out of titanium, aluminium, nickel and steel.

“Parts and components normally produced in northern Italy and other parts of Europe at the casting shops and forging shops, with the recent unfortunate COVID-19 environment shutting down a lot of this industry, some of these customers in Australia are looking for local solutions,” said Mr Sales.

There is growing interest from the oil and gas sector for his locally made products, as Mr Sales also eyes off orders as part of the Royal Australian Navy’s fleet expansion.

“Our technology offers the possibility of reduced lead times and reduced manufacturing times and the process we’ve got actually offers enhanced strength, which is more beneficial than the traditional casting and forging techniques,” Mr Sales said. 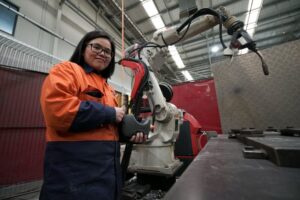 AML3D has been fielding extra orders since many of its larger competitors in Europe were forced to shut. (ABC News: Michael Clements)

AML3D’s growth is the kind of resurgence economists and those in the sector want to see more of to pull manufacturing out of its decline.

In the late 1980s manufacturing was the biggest employer in Australia, with 16.5 per cent of the workforce.

Now less than 1 million people work in the sector, accounting for 6.4 per cent of jobs.

Manufacturing’s contribution to GDP peaked in the late 1950s and into the 60s when it was just shy of 30 per cent. Now it has shrunk to about 5.5 per cent. 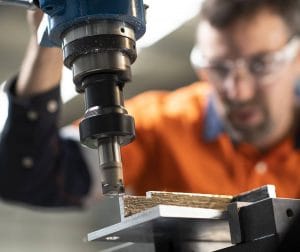 A worker uses a tool to shape metal at AML3D’s factory in Adelaide.(Supplied: AML3D)

New analysis shared with The Business by The Australia Institute’s Centre for Future Work reveals Australia does not fare well against its OECD counterparts.

“Most other industrial countries have manufacturing sectors that are successful and large enough to, in aggregate, meet their own domestic needs for manufactured products,” report author and director of the centre Jim Stanford explained.

“In Australia’s case, however, we’re using more manufactured goods all the time but we’re producing a smaller and smaller share of those.”

Australia is last, producing about two thirds as much manufactured output as it consumes.

Most other OECD countries produce, on aggregate, more manufactured goods than they consume.

“Australia has one of the most underdeveloped manufacturing sectors of any industrial country in the world,” Dr Stanford told The Business.

“I think there is a mistaken assumption that if you’re a rich, high-wage, industrial country you just can’t do manufacturing. After all, it’s much cheaper to do things in China or Thailand or some other low-wage country.

“We found that traditional assumption is absolutely false.”

“I think it’s a pragmatic and ambitious goal to try and rebuild manufacturing in Australia back to a level that’s comparable to our own need for manufacture,” Dr Stanford said. 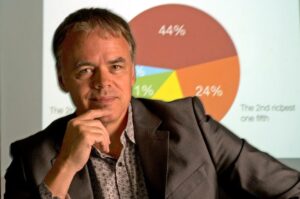 The impact the COVID-19 pandemic has had on businesses and workers across the nation is well documented.

Advocates for manufacturing say the sector could again be a major employer if it is encouraged to grow.

Most of the 926,000 workers in the sector are employed by small to medium enterprises (SME) with fewer than 20 employees.

“We’ve gone from being a very significant employer to less than a million people now,” said Vonda Fenwick, the chief executive of the South East Melbourne Manufacturers Alliance (SEMMA).

Her group is one of many calling on the Government to incentivise more manufacturing in Australia.

SEMMA is calling on all tiers of government to buy more locally made goods. 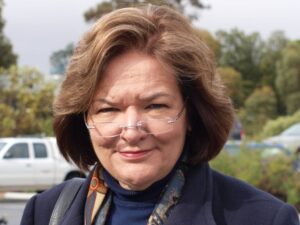 After the roofs of the Australian National University and the National Library of Australia were damaged by January’s Canberra hailstorm, they were covered in an Australian invention made in Sydney.

Stormseal is a polyethylene film that is laid on storm-damaged roofs. Heat is applied to it and it shrink wraps onto the roof.

The company’s managing director Matthew Lennox makes the product on food-grade manufacturing facilities in Sydney and most capital cities in Australia.

The company’s managing director Matthew Lennox makes the product on food-grade manufacturing facilities in Sydney and most capital cities in Australia.

He also has plants making his product in France and the US.

“We call it a storm-ready response product, so what that means is that when a big storm hits we actually have the ability to make it on demand, which allows us to not to have to hold stock or have expenditure when we don’t need it,” he said.

Mr Lennox has been approached to produce the film in Asia where it would be cheaper, but he said making it close to his customers meant he could deliver the film more quickly and support the local economy. 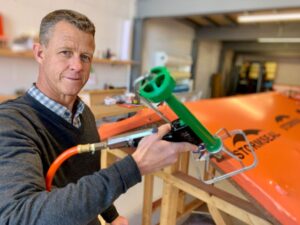 “It’s good in respect to keeping jobs here in Australia for the reason of the manufacturing side of things,” he said.

“But it’s not just the manufacturing, it’s the supply chain that has benefits too, so our polymer, our fire retardancy, our UV inhibitors that go into the film, that all has a flow-on benefit.

“Outside of that, we’ve got several consultants that we use for marketing and sales and communications that are all Australian based too.”

About 30,000 square metres of his product remains on the roofs of national buildings in Canberra.

Australia’s extensive mineral resources — including iron ore, bauxite and nickel — plus other primary products, such as agriculture, account for about three quarters of our goods exports. 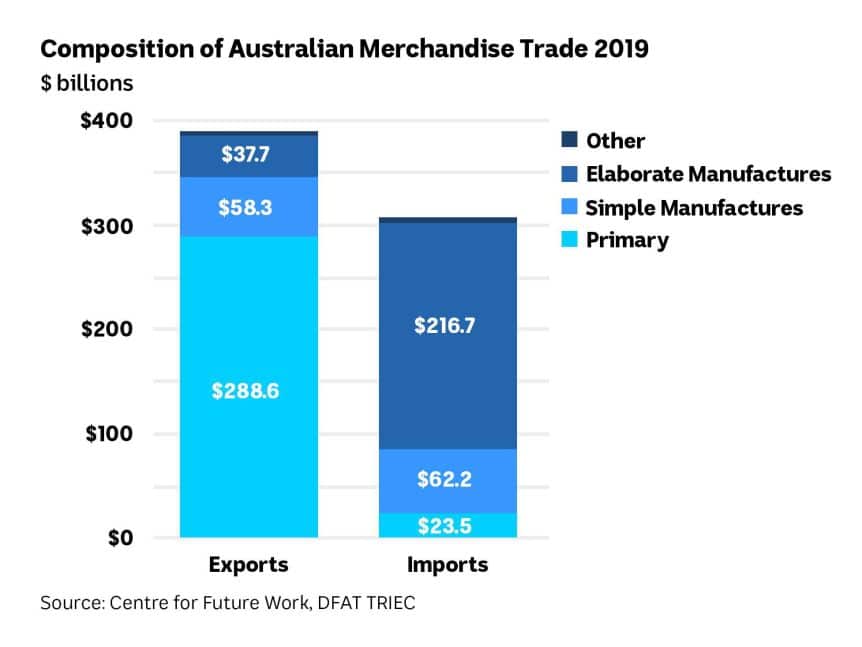 However, Dr Stanford said Australia was selling itself short by exporting minerals such as lithium, a mineral we are the largest producer of in the world, in its raw form.

“Once again we’re limiting our horizons to just digging it out of the ground and then sending it to other countries, to then manufacture it into these value-added products that we then import back from them,” he said.

“About two thirds of all world trade consists of manufactured products, so if you don’t have a strong domestic manufacturing base you’re shutting yourself out of most world commerce,” he said.

Source: ABC ARTICLE – Australian manufacturing has been in terminal decline but coronavirus might revive it